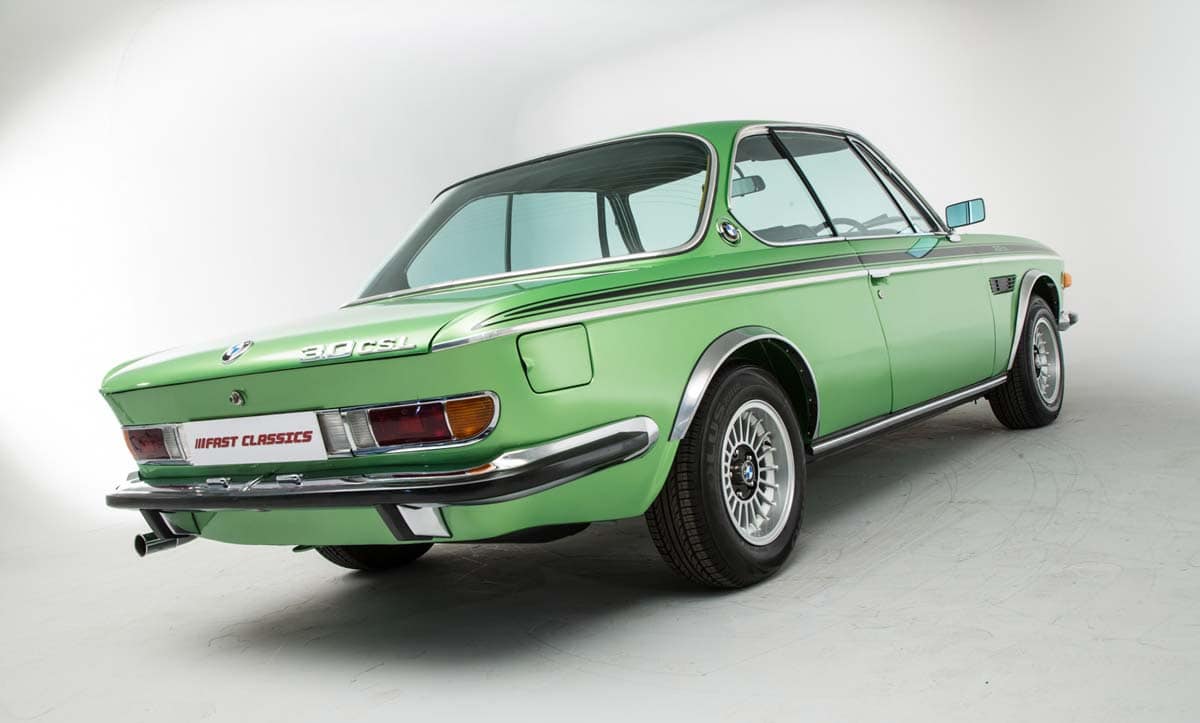 Even though the BMW 3.0 CSL Touring doesn’t carry the M-badge, this model is considered by many as the first-ever M-car. The model was specifically designed for racing by a separate division in BMW AG, that would later become BMW Motorsport GmbH. Following a long and successful racing career, the car earned its legendary status among racing enthusiasts – and you can now own your very own prime example!

BMW introduced the legendary 3.0 CSL in 1972 as a homologation specifically built to make the car eligible for racing in the European Touring Car Championship. The “L” in the designation meant leicht (light) unlike other BMW models where is meant lang (long) which was emphasizing the focus on weight reduction using thinner steel for the body, deleting trim and soundproofing and using aluminum alloy doors, bonnet and boot lit as well as side windows in acrylic glass (Perspex).

Just 500 Right-Hand Drive CSLs were produced and the 1972 Taiga Green 3.0 CLS currently for sale at Fast Classics has chassis number 007. Nearly all the RHDs had additional equipment to help aid the drivability of the car on a day to day basis. These additional options were grouped and labeled the ‘City Package’ and included power glass front and rear windows, power steering, interior bonnet release, chrome CSi front and rear bumpers and a tool kit.

Check out: The resurrection of the world’s only Lamborghini Miura SVR

Chassis number 007 includes the city pack and is finished in the must-have period color Taiga Green with a first-class paint job. It has recently completed a 2-year nut and bolt restoration and has been cared for its entire life with a full history file and complete photo album of the restoration. The theme is complete underneath and inside with all components treated, rebuilt or replaced to complete an original and spotless finish for the legendary touring car.

After the final version of the 3.0 CSL was homologated, BMW made an aerodynamic package including a large air dam, short fins running along with the front fenders, a spoiler above and behind the trailing edge of the roof and a tall rear wing. The rear wings were not installed at the factory but left by BMW in the boot of the car for installation after purchase as the wings were illegal for use on German roads. The full aero package earned the racing CSLs the nickname “Batmobile”.

Related: What makes the E46 BMW M3 CSL so special?

The team at Fast Classics is passionate about great driving passion and focus on selling the most treasured cars with low mileage and very few owners. The company operates from a 10,000 sq. ft indoor showroom that also includes a professional photo studio often used by Top Gear, McLaren and Alpine Stars. Other brands include Great British Classics, Millennium Heroes and The Octane Collection.