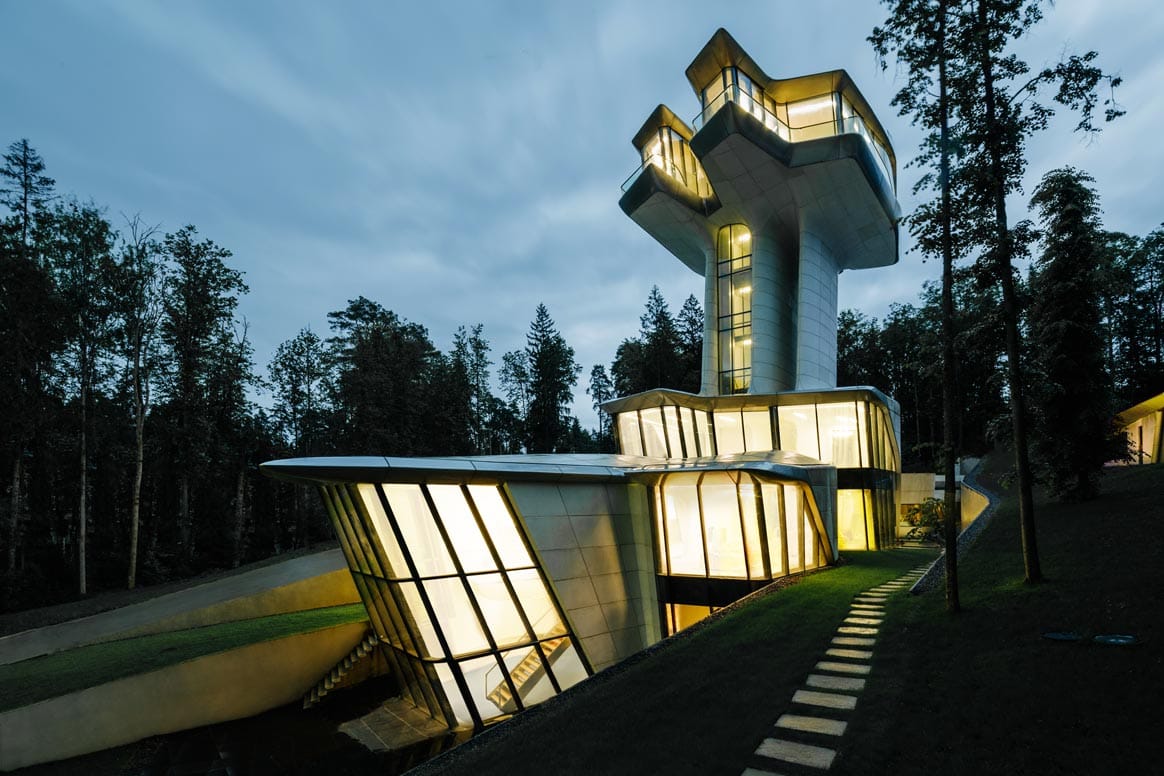 In the Barvikha Forest near Moscow the pine where the birch trees grow up to 20 meters high a magnificent piece of architecture emerges from the landscape. The architect created a masterpiece that offers stunning views and incredible light despite of being partially embedded in a forest hillside. Welcome to Capital Hill Residence by Zaha Hadid.

The story of Zaha Hadid

Zaha Hadid was born on 31 October 1950 in Baghdad, Iraq. She grew up in an upper-class family and studied mathematics at the American University of Beirut before moving to London in 1972 to study Architecture. In 2004, Hadid became the first woman to receive the Pritzker Architecture Prize. She also received the UK’s most prestigious architectural award, the Stirling Prize twice and was made a Dame by Queen Elizabeth II for services to architecture.

Hadid opened her own architectural firm, Zaha Hadid Architects, in London in 1980 and she taught architecture besides running the company with 150 employees. Zaha Hadid never married and had no children, something she explained with the words: “If [architecture] does not take over completely, you’re not something to have. You have to give it full time”. Hadid died in 2016 of a heart attack.

Queen of the curve

Zaha Hadid was recognized for pushing the limits of architecture and urban art. She earned the nickname ‘Queen of the curve’ and have said: “There are 360 degrees, so why stick to one?”. Her design often includes sweeping curves and waves and her major works include the aquatic centre for the London 2012 Olympics, Michigan State University’s Broad Art Museum in the US, and the Guangzhou Opera House in China.

Some of her designs have been presented posthumously as several of her buildings were still under construction at the time of her death. This includes the Al Wakrah Stadium in Qatar, a venue for the 2022 FIFA World Cup, as well as the Capital Hill Residence.

Check out: Re-designing an old airport into a modern hotel

The 2,650 m2 private residence in Moscow, Russia has been under construction from 2006-2018. The client, Vladislav Doronin explained “I want to wake up in the morning and just see blue sky”. Zaha Hadid replied, “You realise you have to be above the trees?”.

The construction is divided into two main components. The first merges with the sloping forested landscape, while a separate volume “floats” 22 meters above the ground. This is to enable the spectacular views of the forest from above the tree tops. The fluid geometries are a Hadid signature and the entire construction a true masterpiece of her visionary design.