Motorcycles such as the ’68 Triumph Bonneville, the 900 Monster and Suzuki’s Katana are responsible for taking ownership pride to a whole new level. Yet, as popular as these two-wheel icons are, few bikes aspire to or achieve Honda’s Monkey mini-bike cult status.

What’s more, the rich and famous are far from impervious to the mini-bike’s charms. Past and present celeb owners include:

John Lennon was a big Monkey mini-bike fan using his 1969 Z50 to ride around his country estate in Berkshire, England. The photograph of Lennon riding around with his son Sean riding pillion is now famous.

Lennon wasn’t the only member of the Fab Four to fall for the charms of the Mini-Trail. Ringo Starr was also a fan and according to urban legend, his was a gift from Lennon.

You may not think of the Duke as a big Monkey mini-bike fan, but still waters run deep. The publicity shots on the set of the movie Big Jake feature John Wayne riding a Honda CL350. Dig a little deeper, though and you can find him riding his 1969 Z50A between shoots.

The King of Cool was a keen off-road racer. Not one to take himself too seriously, he enjoyed blasting around his ranch on a Z50A. McQueen’s son Chad and child actor Mitch Vogal also spent lots of time kicking up mini rooster tails on the tiny trail bikes. When shooting for the movie The Reivers ended (featuring McQueen and Vogal), McQueen made a customary end-of-shoot presentation. The gift was a 1969 Z50A painted and engraved by buddy and legendary custom painter Von Dutch. 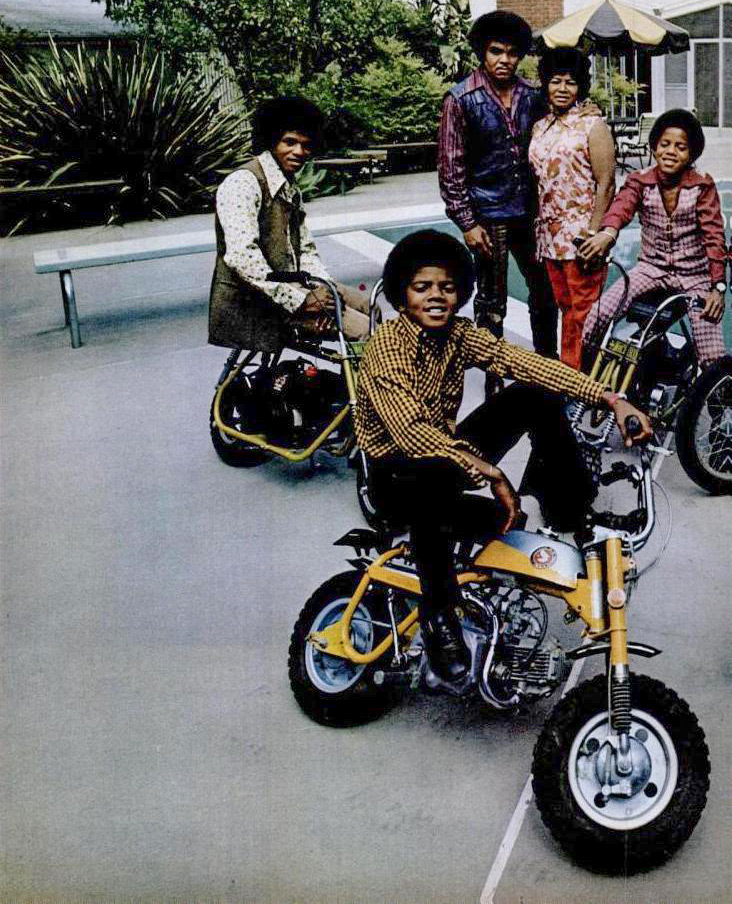 A young Michael Jackson and the other Jackson 5 members were also Monkey bike fans. They could often be seen riding around the grounds of their Californian home.

The world-famous Wheelie-ing Elvi is a 12-strong group of Elvis impersonators who wheelie around the USA. The fun-loving dozen perform stunts and formation rides at festivals and parades riding Honda Monkey bikes.

Owning a Monkey mini-bike is fun! But for some avid fans, it’s serious monkey business? So let’s stop monkeying around and check out some more tiny bike trivia!

This title goes to former Beatle’s member John Lennon and his legendary 1969 Z50A Monkey bike. The mini-motorcycle sold at auction for GBP57500 (USD80000), realising nearly double the anticipated GBP30,000 sale price. The bike went under the hammer at the UK’s National Motorcycle Museum (NEC) in Solihull.

In 2009, Czech motorcycle enthusiast and nine-time Dakar competitor Ivo Kastan took his specially tuned Honda Monkey bike to the Bonneville Flats. Here, he set a new world record for the fastest ever Monkey bike, clocking up a speed of 100-mph.