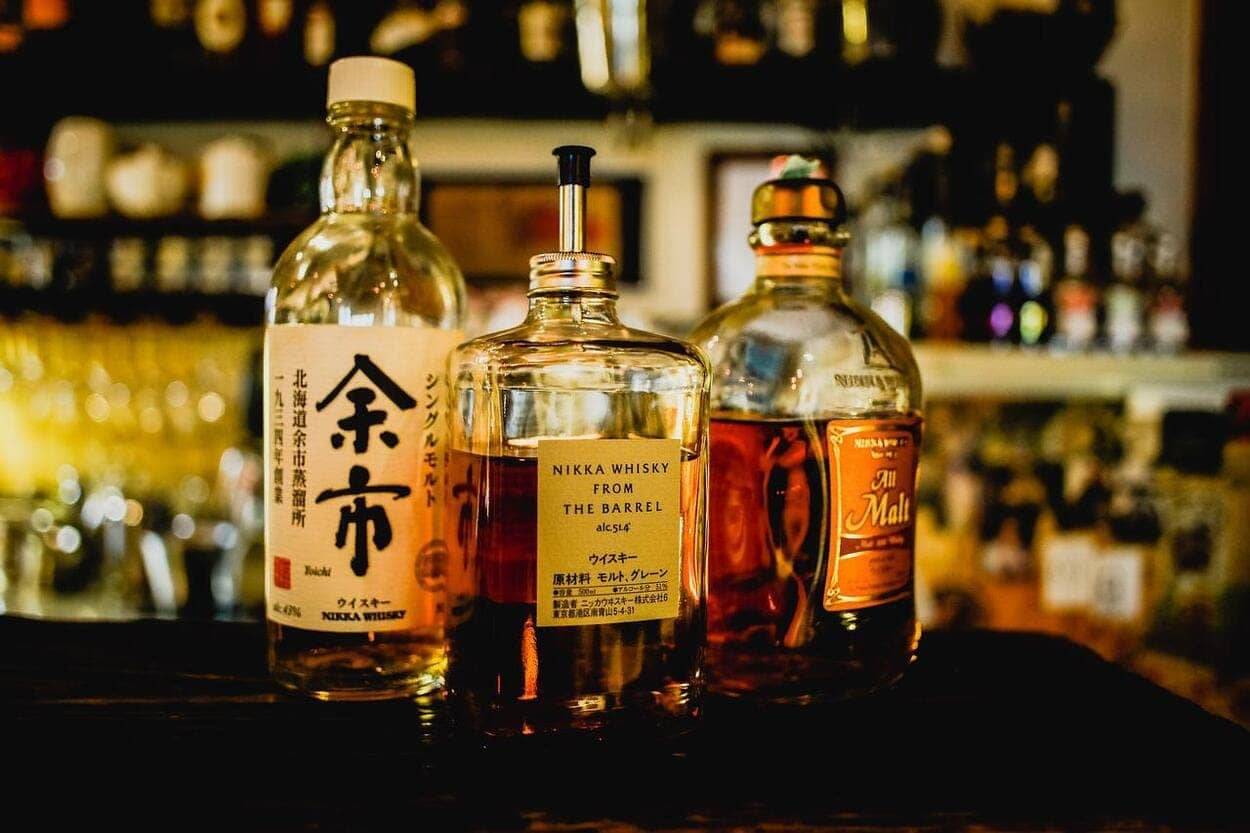 Did you know Japan imports most of its whisky ingredients from the Isles of Scotland? That’s right, although Japan’s distilleries claim to use a different method of distilling their whisky, the foundation of this premium beverage is created using malted and/or peated barley ingredients from the Scotland Isles.

Pour yourself a glass as we explore the distinct flavor profiles of Japanese whisky and a verbal taste of why Suntory and Nikka’s Japanese Distilleries – should be a must-see on your next trip to Japan!

Before we continue: Do you wanna know when it’s called whiskey and whisky?

Before we dive into where to go to experience Japan’s finest whisky – let us give you a verbal taste of what to expect. Japanese whisky distilleries are well known for producing a complex smokey but tantalizing, subtly sweet flavor profile. This is derived from aging the whisky in imported bourbon barrels or the local method of creating barrels from a native Mizunara tree. Mizunara trees (which translates to: “Water Oak”) were introduced in World War II when it became harder to source imported casks. Whisky makers had no choice but to start sourcing cask barrel materials from native oak trees. After much experimentation, the Mizunara tree stood the test of time and delivered a similar but surprisingly more distinct, smokier flavor profile.

Japanese Distillers also believe Japanese Whisky tastes more unique due to their mineral-rich water sources and high altitudes. Water is drawn straight from some of Japan’s beautiful mountain streams. The higher altitude helps Japanese distillers reach ‘peak’ performance with lower boiling temperatures to control. This can create a more natural partial low-pressure whisky distillation process. In lower altitudes, this process takes a lot longer as it must be distilled several times to achieve a similar outcome but is compromised by losing a lot of the natural flavor profiles.

Lastly important to note that most of your high grade Japanese whisky’s will be aged at 12 years – with some more premium whisky’s at 18 years and even 25 years. To give you a frame of reference, up to 6 years is the minimal range to produce a quality flavour profile, 12 years is the optimal average.

You could say this distillery is ‘out of this world’ namely due to their innovative outer space exploration in partnership with Japan Aerospace Exploration Agency (JAXA). In 2015, Suntory sought out to test the boundaries of a microgravity environment on their whisky using the Space Station’s Japanese Experiment Module ‘Kibo’ – we’ll have to watch this ‘space’ to see the results.

Back on planet earth in Japan, Suntory owns three of the world’s best distilleries:

Established by Suntory’s founder Shinjiro Torii having admired the traditional ways of Scottish Whiskey making – Shinjiro sought to create his own Whisky to be distinctly different with the help of the earth’s elements; water in its purest form, terrain, and high altitudes. Yamazaki Distillery sits on the periphery of Kyoto between Mount Tennozan and Mount Otokoyama where the Katsura, Uji and Kizu rivers intertwine. The Yamazaki Distillery Tour is a paid tour which details the craftsmanship of the whisky a tasting of their unblended whisky to give you a true appreciation for their distinct flavour profiles.

One of the highest distilleries in the world, built amidst the deep forests of Mt. Kaikomagatake and joining rivers Ojira and Jingu in the Japanese Southern Alps. Hakushu Distillery produces malt whiskies in a very unique microclimate, viridescent forests with rain and snow water filtered through thousand-year-old granite rocks. Whilst Hakushu Distillery production process remains Japan’s best-kept secret, you will enjoy the tour to introduce and taste the craftsmen’s dedication to producing a variety of distinctive whiskies that make up Hakushu Single Malt Whisky. Distillery viewing is free with reservations required but note you are unable to view their production process. Promised to be distinctly different from its ancestor Yamazaki – but we will let you be the judge of that!

On the misty, calm shores of Chita Peninsula, Keizo built a distillery dedicated to creating the highest-quality Japanese grain whisky. Let’s take a moment to talk through grain whiskies. This unique distillery produces three types of corn grain whiskies which are distilled through a number of columns; heavy (2), medium (3) and clean (4) these unique grain whiskies are commonly used to blend Japanese whiskey however their complex Single Grain Whiskey remains elite amongst premium grade whiskies. Whilst the actual distillery is not currently running tours – its environmental sea shore surroundings are certainly worth a visit in Aichi Prefecture of the center of Japan, Chita Peninsula.

Below are some of the famous Nikka distilleries!

If you wanted to work in Yoichi you might have a better chance of being previously employed as a pyrotechnic than a distiller of Whisky. A huge point of difference for Yoichi in Japan is its rare use of pot still, and direct coal-fire in its distilling process to achieve their toasty smoked flavor profiles. Coal fires are incredibly difficult to regulate temperature and require highly trained specialists. You will also find many similarities in Yoichi to other traditional distillery processes used in Scotland. This is because the founder, Masataka Taketsuru, studied and practiced his whisky craftsmanship in Longmorn Distillery, Scotland. When Masataka returned to Japan, he settled in close proximity to the sea breeze and surrounded himself with a peninsula of mountains to mimic the Scottish Highlands. You’ll need to buddy up with a local as guided tours are available in Japanese only and require a reservation.

Resting between a beautiful foggy glen surrounded by mountains and at a junction of two clean rivers, one of which is named Nikkawa – sound familiar? Its key point of difference is again within the pot sills, which resemble large horn-like shapes and use steam at low temperatures vs coal fire to create its distinctive Miyagikyo Single Malt. A bonus feature of this distillery is its production of Grain whisky in Coffey Stills! Not to be confused with our caffeinated friend “Coffee” the name of this still was actually derived by its founder Mr. Aeneas Coffey in 1830. Distillery tours are available but note there is only one whisky available for a free tasting and an additional three to purchase, so be sure to try these whiskies before you come to appreciate the diversity of flavor profiles truly!

There are, of course, many other incredible distilleries to explore in Japan, thanks partly to Scotland. Suntory and Nikka certainly cover the most diverse distilling processes, so move them up on your whisky bucket list!