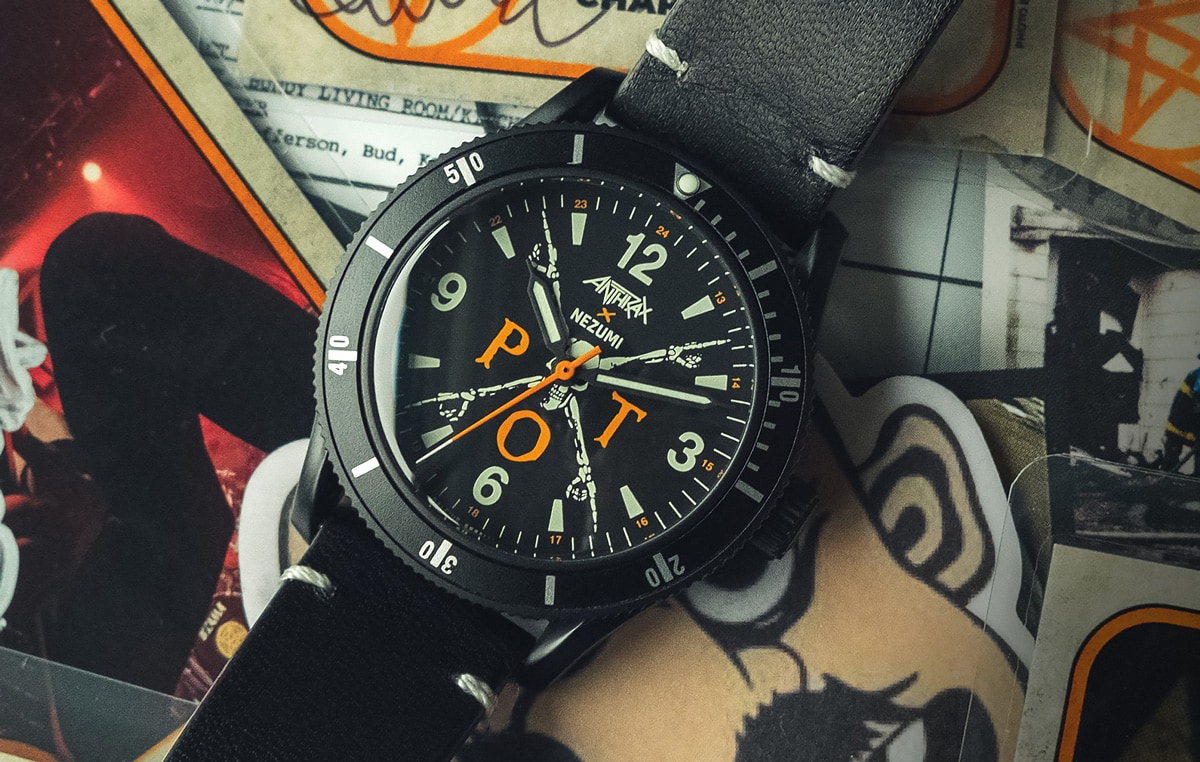 ‘Persistence of Time’ was the fifth studio album by Anthrax and a huge success that also gave the trash metal band a Grammy nomination in 1991.

The album title and hit song ‘Got the Time’ made it a perfect fit for a watch to celebrate the 30-year anniversary.

If you came for the specifications of the watch – click here.

Designer and Founder of Nezumi Studios, David Campo is the man behind the limited edition Anthrax watch. The unique 40mm automatic timepiece is created in collaboration with the band for the 30 year anniversary of the album ‘Persistence of Time’ (See album cover here).

Inspiration has been taken from the original artwork of the album and the limited watch is made in only 50 pieces, each individually numbered.

“Being a fan since the late 80s, it’s been an honour to take part in the 30-year anniversary of the album”

Tribute to ‘Persistence of time’

Anthrax was formed in 1981 in New York by rhythm guitarist Scott Ian. ‘Persistence of time’ was released in 1990 as their fifth studio album and huge success that also resulted in a Grammy Award nomination in 1991. The album showed a more serious side of the band, was more technical and also had a darker expression.

The hit song ‘Got the Time’, as well as the cover of the album featuring several clocks, made it a perfect fit for a watch to celebrate the 30-year anniversary.

Part of ‘The Big Four’

Through the 1980s, Anthrax was a fundamental part of building the trash metal genre with their fast tempo and double bass drumming. The term ‘trash metal’ was actually first used by a journalist referring to the Anthrax song “Metal Thrashing Mad” – until then, the genre was known as speed metal or power metal.

Anthrax also became part of ‘The Big Four’ and went on tour with Metallica, Megadeth and Slayer; the four biggest names in trash metal.

David from NEZUMI Studios has a special relationship with Anthrax that goes back to the 80s when he listened to metal on his battery-driven BoomBox and practiced licks on his guitar.

Many years later, he got to know Charlie Benante, drummer of Anthrax, through their mutual friend, David Ellefson of Megadeth.

When Anthrax started planning the 30 year anniversary of Persistence of Time, they asked if David wanted to design a watch for them; an easy yes! “Being a fan since the late 80s, it’s been an honor to take part in the 30-year anniversary of the album”, David says.

NEZUMI Studios has created the Anthrax watch based on their Baleine dive watch. The rugged diver has a classic aesthetic that is buffed-up in this blacked-out edition with a DLC (Diamond-Like Carbon) black coated case. The watch is water-resistant to 200m/660 ft, has ‘Nezumi X Anthrax’ branded on the dial and case and a fully luminescent skull and crossbones.

The NEZUMI Specials edition is ultra-limited with just 50 watches, each with an individual number. This is the perfect timepiece for the true trash metal fans out there!