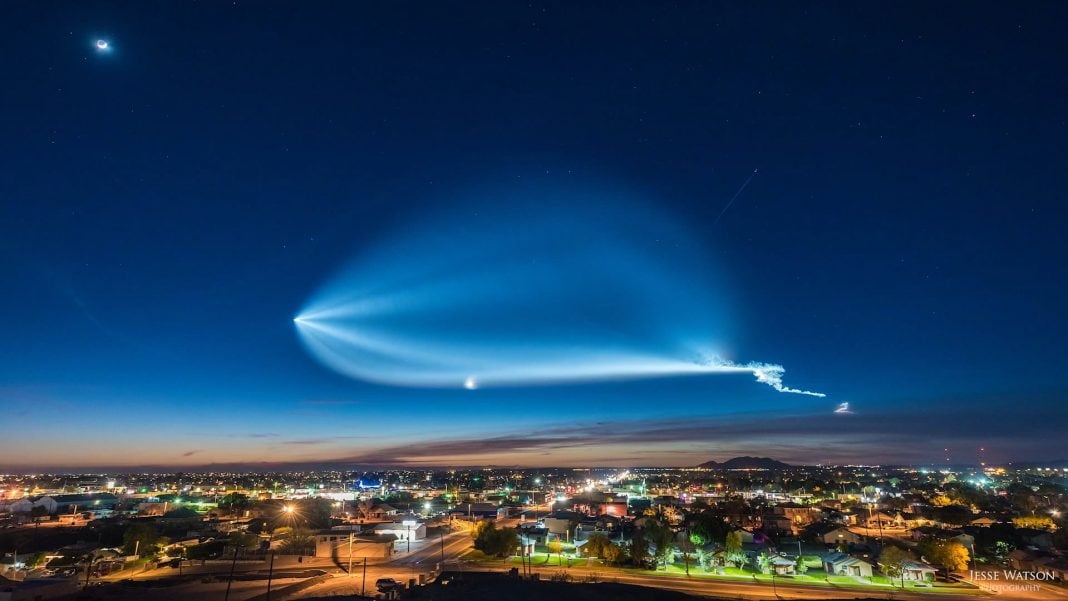 On December 22, 2017 Elon Musk and his team launched the Falcon 9 rocket from SpaceX in Vandenberg Air Force base in southern California. Photographer Jesse Watson captured the scene in spectacular detail.

At around 5.30 PM Pacific time, the evening sky delivered a perfect scenery for the launch. The rocket’s exhaust gasses created a beautiful ghostlike pattern across the sky to all viewers across the southwestern U.S.

Jesse Watson viewed the launch from his hometown of Yuma, Arizona, and captured it all with a Nikon D810 with a wide-angle lens. “It took 2,452 images which were then cut down to 1,315 images for the final project and edited in Adobe After Effects and Adobe Premiere Pro,” the outlet reports. The result is mind blowing!

After Falcon 9 delivered a show across the sky, it landed in the Pacific Ocean. According to SpaceflightNow, the rocket established “10 new satellites to Iridium’s upgraded communications network.”

This was SpaceX’s 18th launch of 2017 and the company’s last mission for the year. In early 2018, it’ll launch its much-anticipated Falcon Heavy. For now, let’s enjoy the awesome Falcon 9 launch video by Jesse Watson.

The Falcon 9 is designed and manufactured by SpaceX. It features a re-usable first stage booster that enables landings on either a ground pad or on a drone ship at sea. Falcon 9 is the first rocket to land on it’s own after delivering a payload to orbit. The rocket’s core boosters have successfully landed and been recovered 21 times out of 26 attempts; an achievement that is expected to reduce launch costs significantly.

Check out: This battery has lasted 175 years and no one knows how

What caused the spectacular light?

Scott Manley explains the phenomenon in more detail and why this particular event looked so different compared to other space rocket launches.