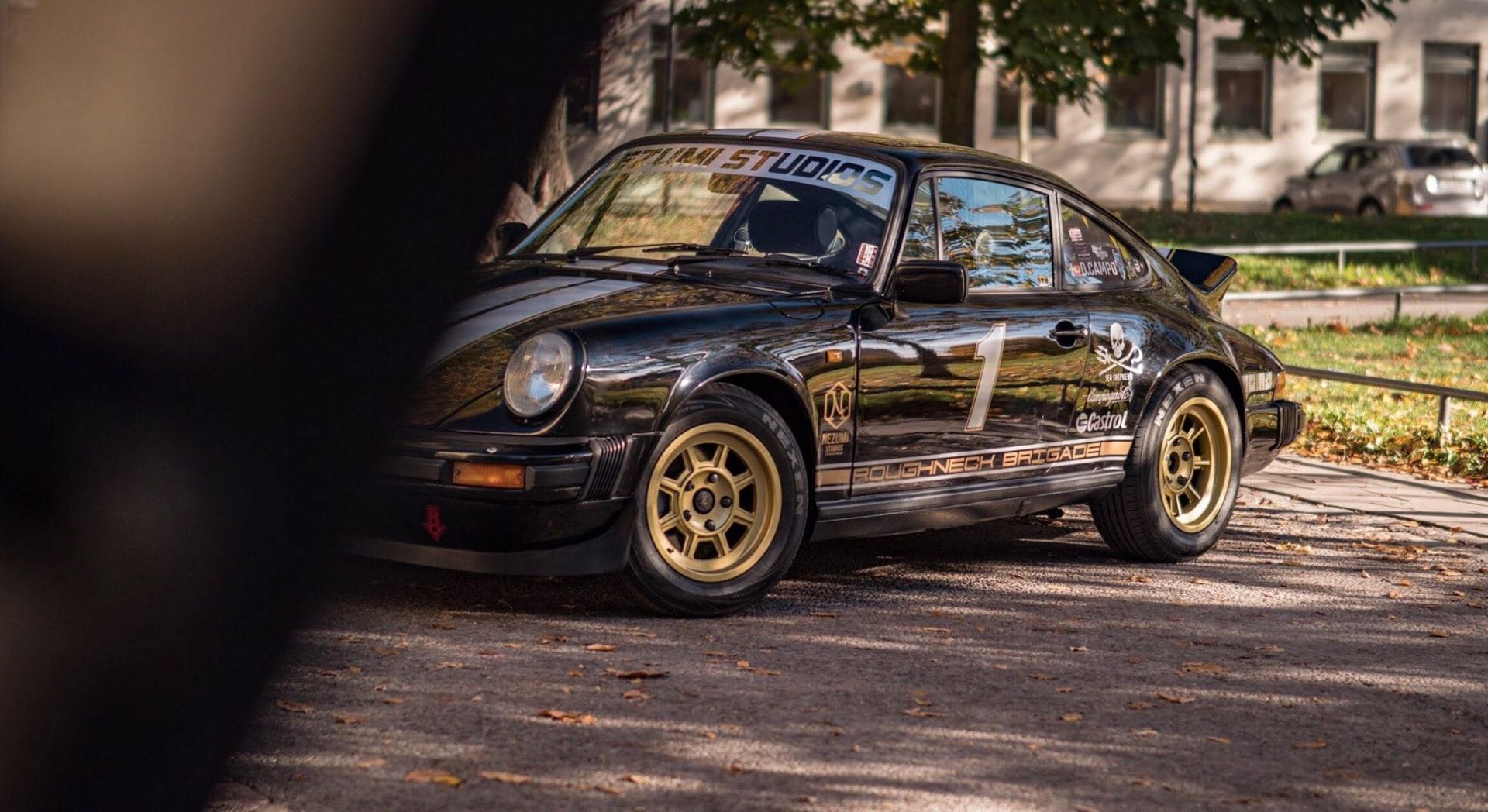 No Shortcuts And No Compromises at Nezumi Studios

David Campo is the man behind Nezumi Studios and Roughneck Brigade™. He has dedicated his life to great design and has managed to combine his three passions; classic sports cars, fashion design and vintage watches. His line of timepieces is inspired by the 60s and 70s and shows uncompromising attention to detail and genuine passion for heritage.

Old News Club meets David Campo on a rainy day in Stockholm. We enter the garage that also functions as his private office and are greeted by a beautiful classic Porsche 911. As David turns on the light, the end of the room is revealed. There is a cool café racer styled Honda, lots of Porsche 911 spare parts and the walls are covered with retro automotive themed posters.

Despite the raw environment with concrete floors and industrial lighting, the room has a warm atmosphere and you quickly get a feeling that this is a place ruled with a fine aesthetic sense and respect for history and materials.

At the back of the office is David’s working space with a dark wooden desk sitting on a big oriental carpet. Besides the expected computer screen and drawing tablet there is also a vintage camera, leather driving gloves and casually on the table corner a classic Porsche steering wheel. Clearly not your ordinary office space but David’s company Nezumi Studios is also far from ordinary.

After years of working as a Concept Designer / Creative Director in the fashion industry with some of the world’s biggest brands and retailers, David decided to go in another direction. He established Nezumi Studios to get total creative freedom and to do things his way – no shortcuts and no compromises. “I wanted to execute my own ideas and do things right. We have used the best materials to achieve the goal of ‘nothing less than perfection’”, David says. 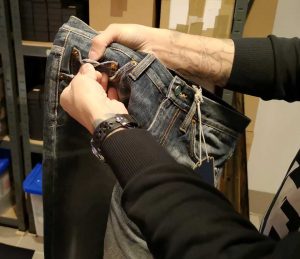 The first Nezumi production was a limited run of jeans made from selvage denim. David keeps number 1/50 at home but happily shows us the other remaining pair while explaining meticulously about the production method and the fabric (13.5 Oz. White Oak Cone Mills blue-lined selvage denim). The design is carefully thought through all the way from the buttons and leather patch to the functional aspects.

Nezumi Studios became successful and shortly after the launch of the first jeans model, David had created a full collection of 70-80 articles. Despite of the success, he took a decision to go back to the original brand philosophy and focus on less items. “I woke up one night and started to draw a watch – without having any idea of how to manufacture it”, David explains. Many people would have stopped there: with just an idea on a piece of paper…but David started to investigate and plan.

After a very successful Kickstarter campaign in 2015, the Voiture classic chronograph was launched and the Nezumi collection now consists of four different timepieces: three chronographs and a diver. David’s main source for inspiration is tool watches from the 60’s – 70’s together with elements from race cars and fighter planes, two things close to the designer’s heart. “My Swedish grandfather was a pilot and flew recon missions”, David explains while showing his grandad’s original watch. Looking at the Nezumi timepieces you can clearly spot the link to the vintage design. A very cool tribute that makes the watches stand out together with the amazing attention to detail.

David Campo:
Who he is and what he does? 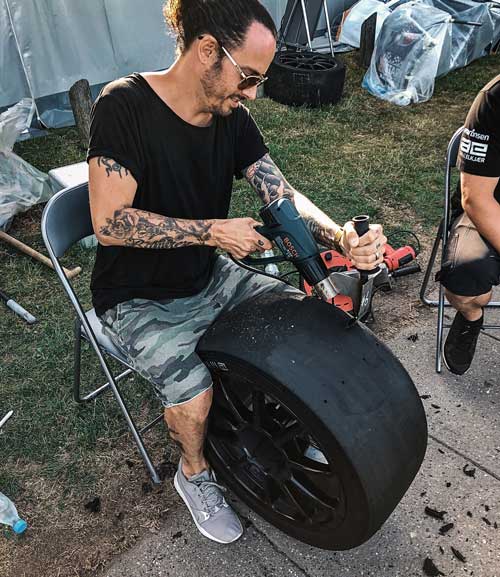 CEO, Founder
and Creative Director of Nezumi Studios – a life style brand with its own line of watches.

Founder and president
of Roughneck Brigade™; a club for air-cooled Porsches.

Grew up in
Sweden, Spain and the US but now lives in Stockholm with his wife.

Has a dog named Swayze
named by David’s wife after Patrick Swayze and his role in Dirty Dancing.
As a tribute to the ‘greaser era’ David has previously named a leather jacket “Johnny”.

In his spare time,
David works on his cars in the garage and is currently building a Porsche outlaw for a friend.

One of David’s biggest passions is classic air-cooled Porsche 911s. He knows his way around each of the special versions and all their unique features. What started out as a hobby quickly turned into something much bigger when David designed a bronze badge for his own car.

I told them, that they couldn’t – I just made the one for myself”. However, David got in contact with some really cool and passionate Porsche owners around the world and ended up founding what is now the “Roughneck Brigade™”; an invitation only, air-cooled classic Porsche club. The Nezumi philosophy of “Creating Bonds” that supports community and new friendships also runs through the club.

David has restored and designed many cars for himself. His first Porsche 911 is a black 911 SC from 1982 which is styled with Campagnolo wheels and the Nezumi brand. His current project is a gorgeous orange 1977 Porsche 911 that has been rebuilt to look like the 74 3.0RS (IROC). It is now being re-modified to a “73 RSR” but with some custom details that will make it into more of an outlaw.

Paul Newman – and not just because of the cars and racing, he’s an idol on multiple levels from his humanitarian work and charities to his own personal style.

What I’m most proud of?

I’m most proud of having the ability to envision something and to then take that vision and run with it fearlessly. I’ve always been that way, it’s in my nature. I love to create and find solutions to problems, I next to never say that something is impossible.

The next step for Nezumi?

We are launching new colorways for the existing timepieces and will also introduce new watch designs as well as other products and accessories. The next big step is global distribution and to get the timepieces out in physical stores.

I’ve always loved the Universal Geneve Compax referred to as the “Nina Rindt” and the Heuer Autavia ref. 2446M referred to as the “Jochen Rindt”. He was a great Formula 1 driver whom unfortunately crashed and passed away in 1970. Since these watches were worn by them as a couple I’ve always wanted to have both as a “set” if you will, I just haven’t pulled the trigger yet.

Choosing something different than a Porsche 911, it has to be a Corvette C2 from 1963 with the split window, also known as “Stingray”. Of course, in the hardtop version and with racing specs. It has a nice resemblance with the Mercedes SL – just way more bad-ass!

We strongly recommend following Nezumi Studios and Roughneck Brigade™ to keep track of David’s projects – from the watches to the cars.

LOOKING TO BUY A WATCH?