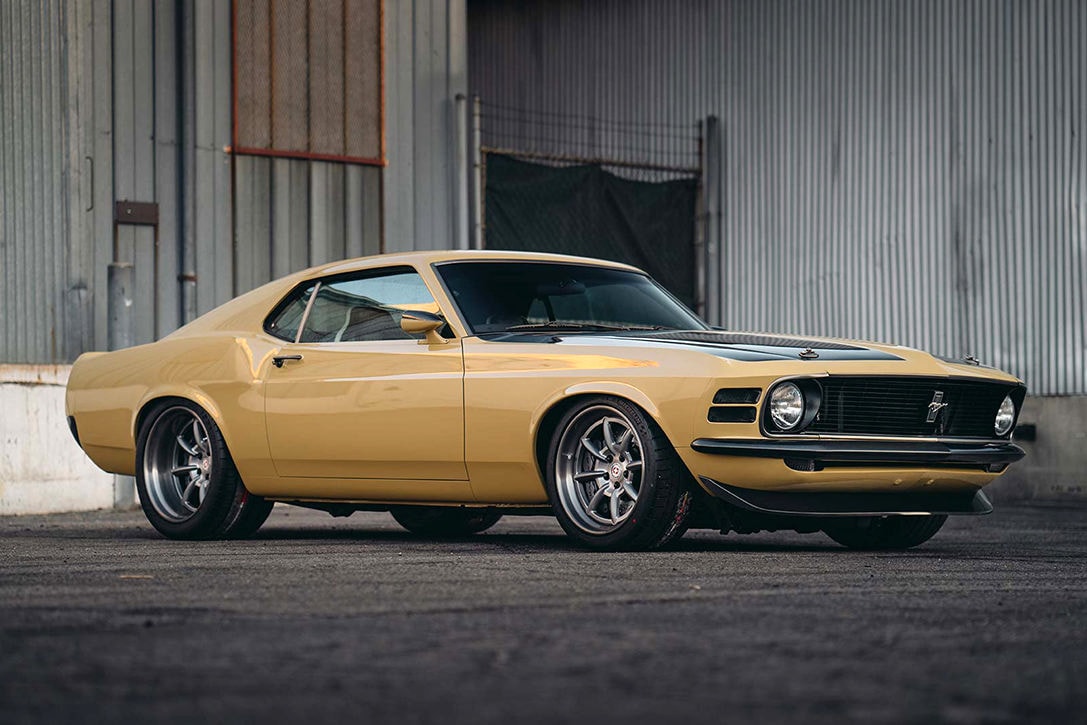 This uber-cool 1970 Ford Mustang Boss 302 is owned by Robert Downey Jr. – a.k.a. Iron Man. American performance company SpeedKore is behind the amazing rebuild which has earned them several awards.

Actor Robert Downey Jr. commissioned the experts at SpeedKore to rebuild his 1970 Ford Mustang Boss 302. The restauration is a “restomod” which means that the vehicle has been put back together with the addition of new modern parts. SpeedKore has installed a brand-new Ford Performance Aluminator 5.0L V8 engine and reduced the weight by replacing original parts with custom carbon-fiber parts.

Being a car enthusiast himself, Robert Downey Jr. was involved in the entire process of making the car. The style is a mix between retro and modern with brown leather, custom steering wheel, old-school instrument cluster and a “Vintage Air” air conditioning system. The exterior is painted in a PPG Khaki Yellow paint and most of the panels are made from carbon-fiber.

The Ford Mustang is probably one of the best-known American muscle cars – and today, both the vintage versions and the brand new are popular throughout the world. The Boss 302 was a high-performance version built in 1969 and 1970 – with an even more powerful sibling, the Boss 429 Mustang. The original engine was produced for the SCCA’s 1969 Trans-Am Road Racing series and was part of an initiative to improve Mustang’s image. The original asking price in 1970 was $3,720 and a total of 7,013 cars were sold.

SpeedKore revealed the classic Mustang at the 2017 SEMA Show where it was awarded the Ford Design Award for ‘Best Heritage Vehicle’. The team specializes in custom performance vehicles, carbon fiber composite part manufacturing and engine integration. Each car is engineered and manufactured from the ground up at their own facility in Wisconsin and they use a special SpeedKore recipe: “reduce weight and increase horsepower”.

Watch AutotopiaLA takes it for a spin

Disclaimer: we will earn a small commission fee if you buy this repair manual from Haynes. This is how we can continue creating great content – we hope you understand.