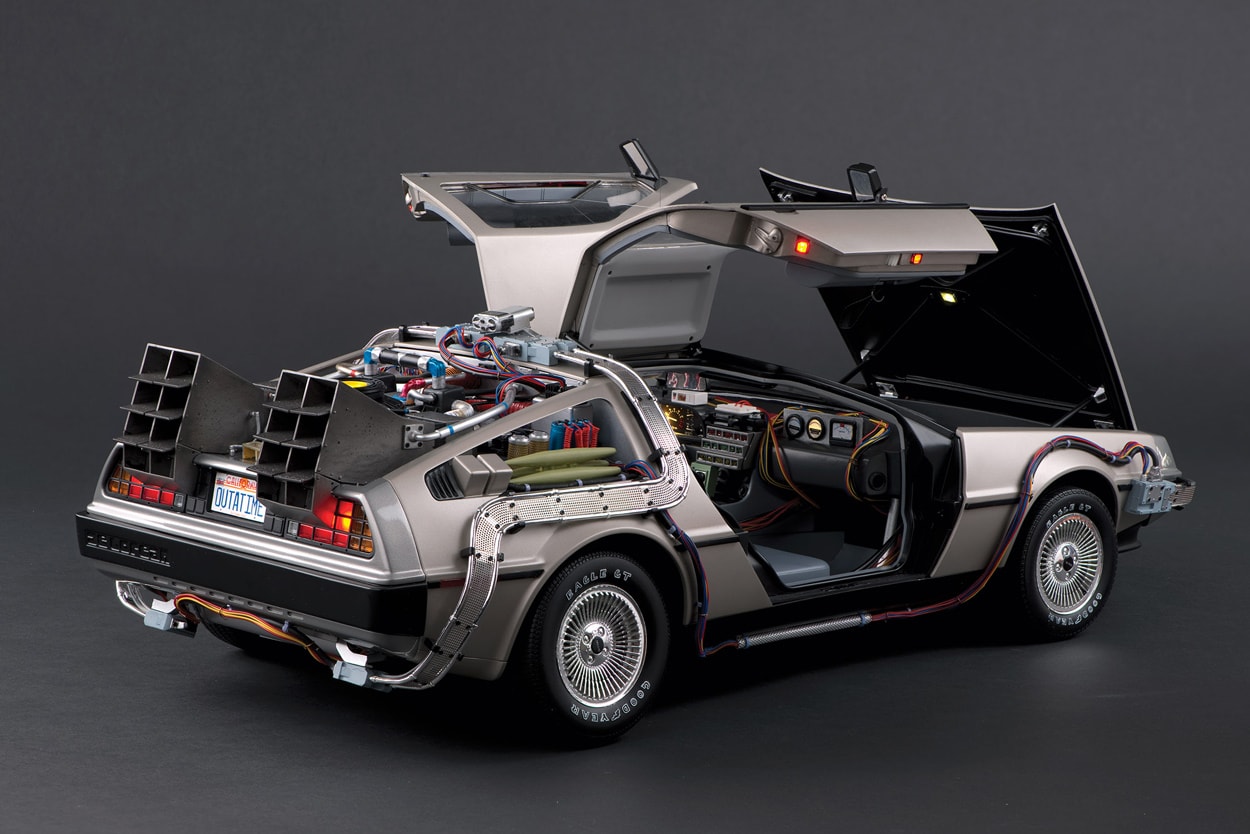 This large scale 1:8 DMC DeLorean by Eaglemoss is a replica of the iconic Back to the Future DMC DeLorean. The die-cast model of the 80s time machine has amazing detail that develops week-by-week until the over 20″ long model is finished. Read more about how to start your own build below – and get fun facts from the movie! 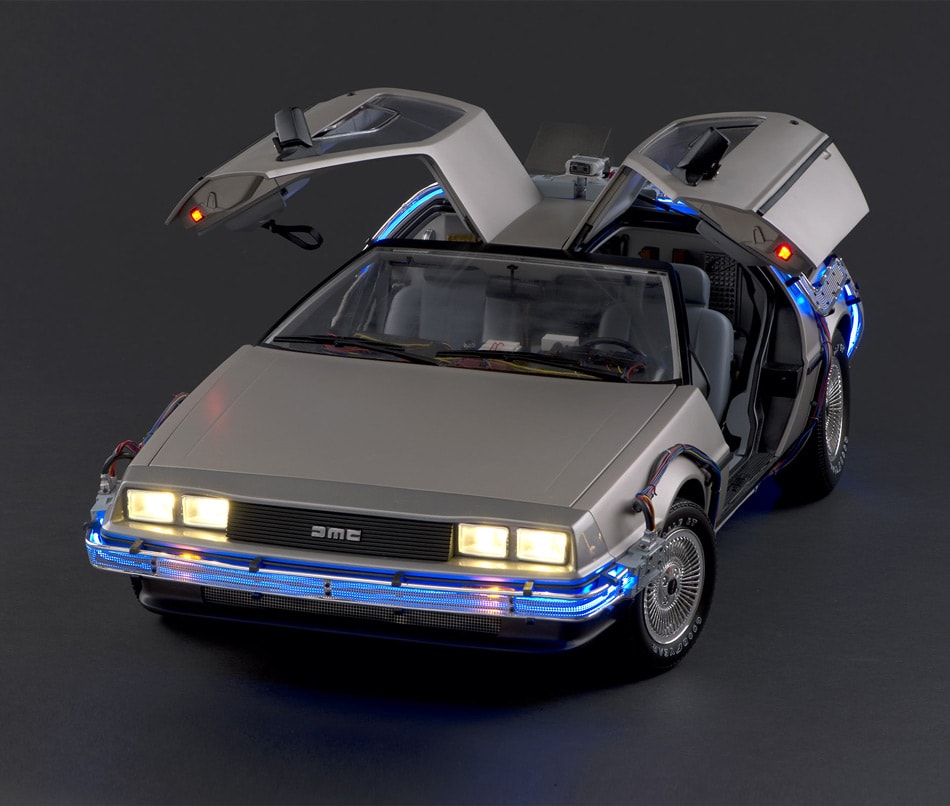 This unique scale model of the 1980s DeLorean model DMC-12 is a tribute to the legendary time machine used by Emmett Brown “Doc” (Christopher Lloyd) and Marty McFly (Michael J. Fox) in the movie ‘Back to the Future’. The first movie was released in 1985. It was later followed by two additional movies: Part II from 1989 and Part III from 1990. In order to time travel, the DeLorean had to reach a speed of 88 mph (142 km/h). This was chosen by the film crew because it was easy to remember and looked “cool” on the speedometer. Three different DeLoreans were used for the movie production. However, for the shot of the flying car, a 1:5 scale model (approximately 33 inches long) was used. 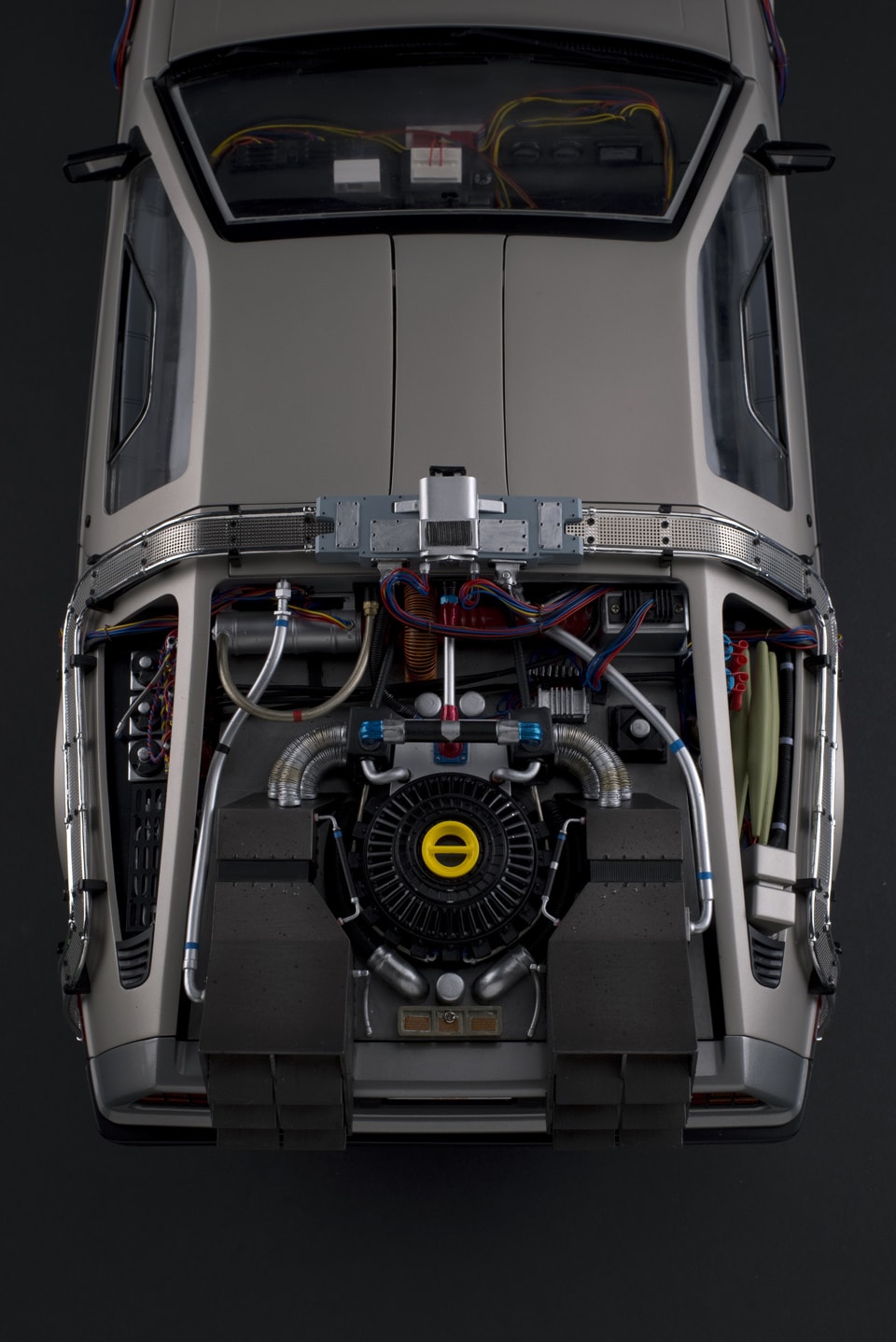 1:8 Scale Build of the Back to the Future DeLorean

Eaglemoss who is behind the scale model has created the Back to the Future DeLorean under the supervision of Joe Walser, the world expert on the DeLorean time machine. It’s packed with tiny details including cables, lights in the ceiling, the flux capacitor, time circuits, and much more. The finished model measures 52.7 cm long and 24.5 cm high with opening seagull doors. Even all Doc’s modifications have been carefully recreated from the nuclear reactor to the cables on the floor. You even have the option to build the versions that appeared in the sequels (Part II and Part III). 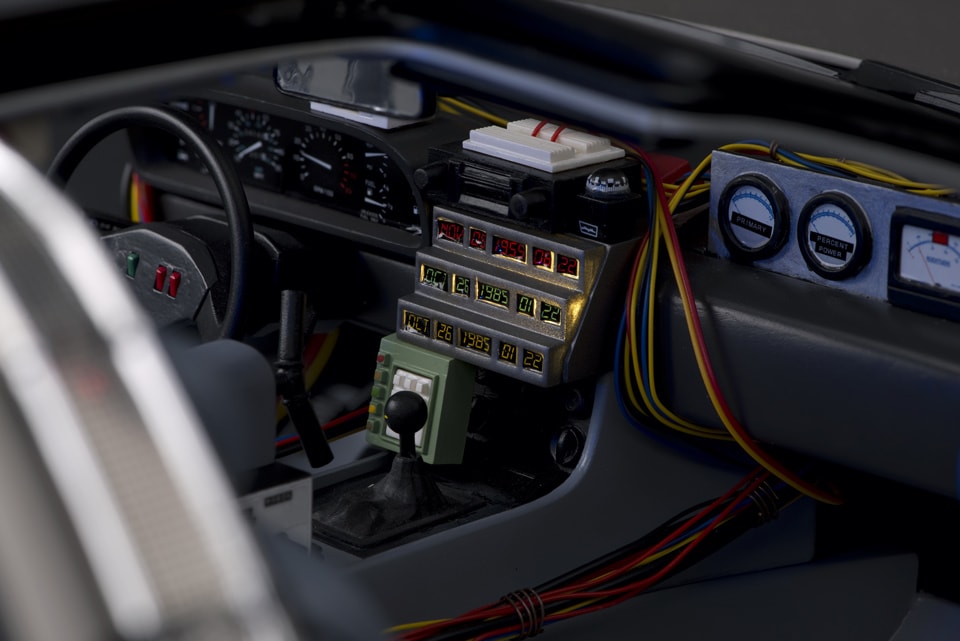 Specifications of the 1:8 Scale DeLorean Model:

How to get it 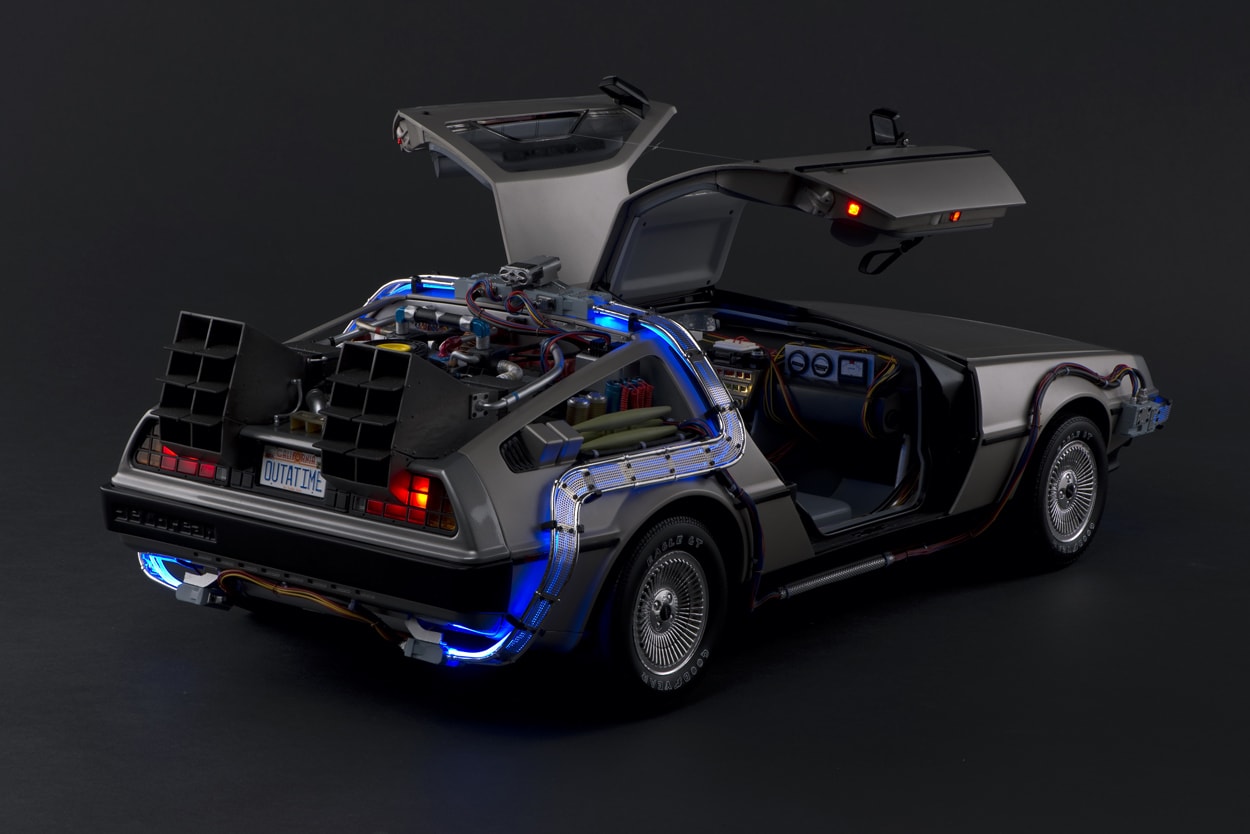 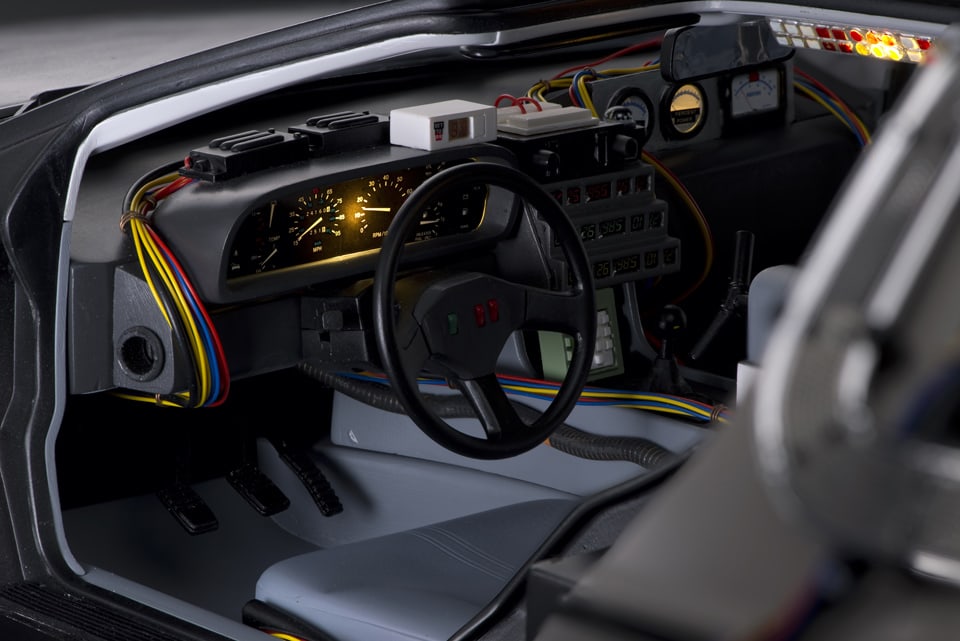 Fun facts about the Back to the Future time machine

At first, the time machine for the first Back to the Future movie was conceived as a stationary device. The device in question was at one point a refrigerator. However, Spielberg vetoed the idea due to a concern that children would start to climb into refrigerators.

The DeLorean was chosen because of its mobility and the unique design with gull-wing doors that had “alien/ UFO features” – at least for a 1950s family. When learning about this, the Ford Motor Company offered the production $75,000 to use a Ford Mustang instead. Writer Bob Gale simply responded; “Doc Brown doesn’t drive a fucking Mustang”“.

October 21 is the official Back to the Future Day and celebrated across the globe. It commemorated the day to which Marty McFly, Dr. Emmett Brown, and Jennifer Parker traveled in the DeLorean time machine at the beginning of Back to the Future Part II.
In addition to the DeLorean time machine, the two most famous movie props are Marty Mcfly’s Nike Mag shoes and his amazing hoverboard. The futuristic sneaker is a limited-edition by Nike that was originally released for sale in 2011 and again in 2016. A total of only 1,599 pairs have been made. The original hoverboard was made by Mattel (yes, the company behind the Barbie doll) but so far, no company has successfully made an actual rideable hoverboard. 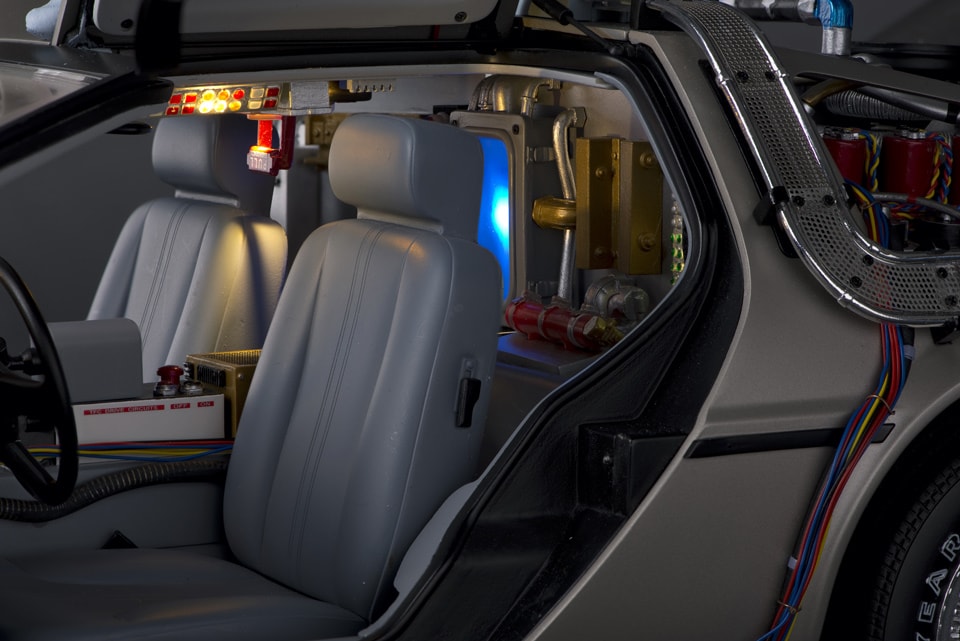 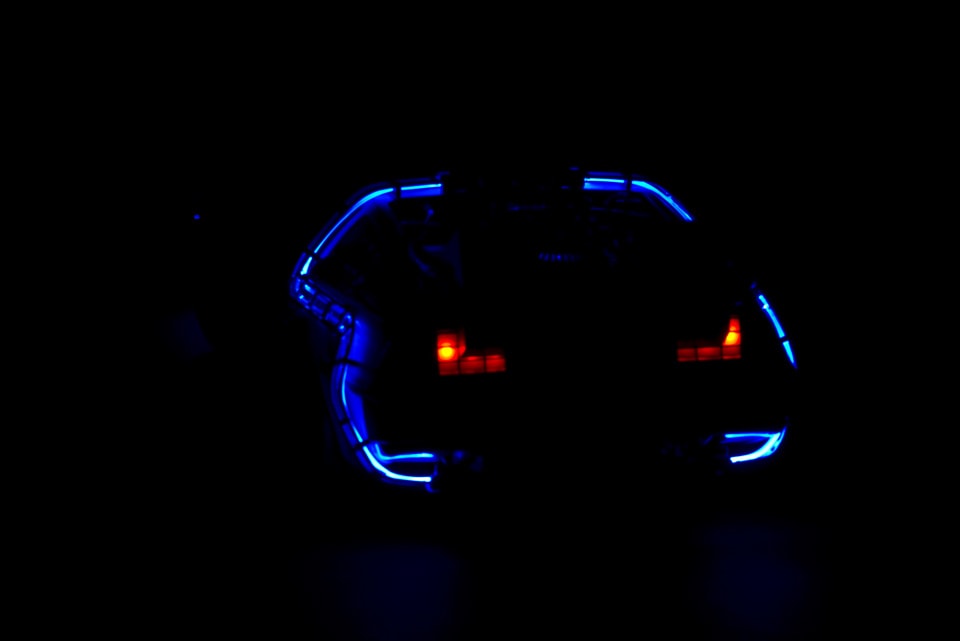 Since 1975, Eaglemoss has produced more than 150 collections of collectible items making them the world’s leading partwork publisher and licensed collectible company. You start your DeLorean build by ordering the introductory offer by Eaglemoss. After starting with model kits 1 and 2, you will receive regular shipments with the remaining kits including free gifts.

Your collection is complete in 130 kits, spread over 33 months. After you finish your 130 kits, your collection will extend by an additional 28 kits to recreate the iconic Back to the Future III scene with a new set of wheels, train rails, and a light-up hood box

After you receive your introductory package, you will receive 4 new kits containing parts and magazines every month to continue building your DeLorean. You will automatically be charged only $10.90 per kit. Shipping is just $2.45 per kit. You will also receive 4 fantastic free gifts during your subscription.

A team of “passionate perfectionists” creates items from your most beloved movies, tv-series, or cartoons giving you a wide variety of items to choose from. Among the options are the Goldfinger Aston Martin DB5 Buildup Collection, the famous Ghostbusters ECTO-1, Willys MB Jeep, or what about building your very own 1967 Mustang Eleanor known from the movie ‘Gone in 60 Seconds’?