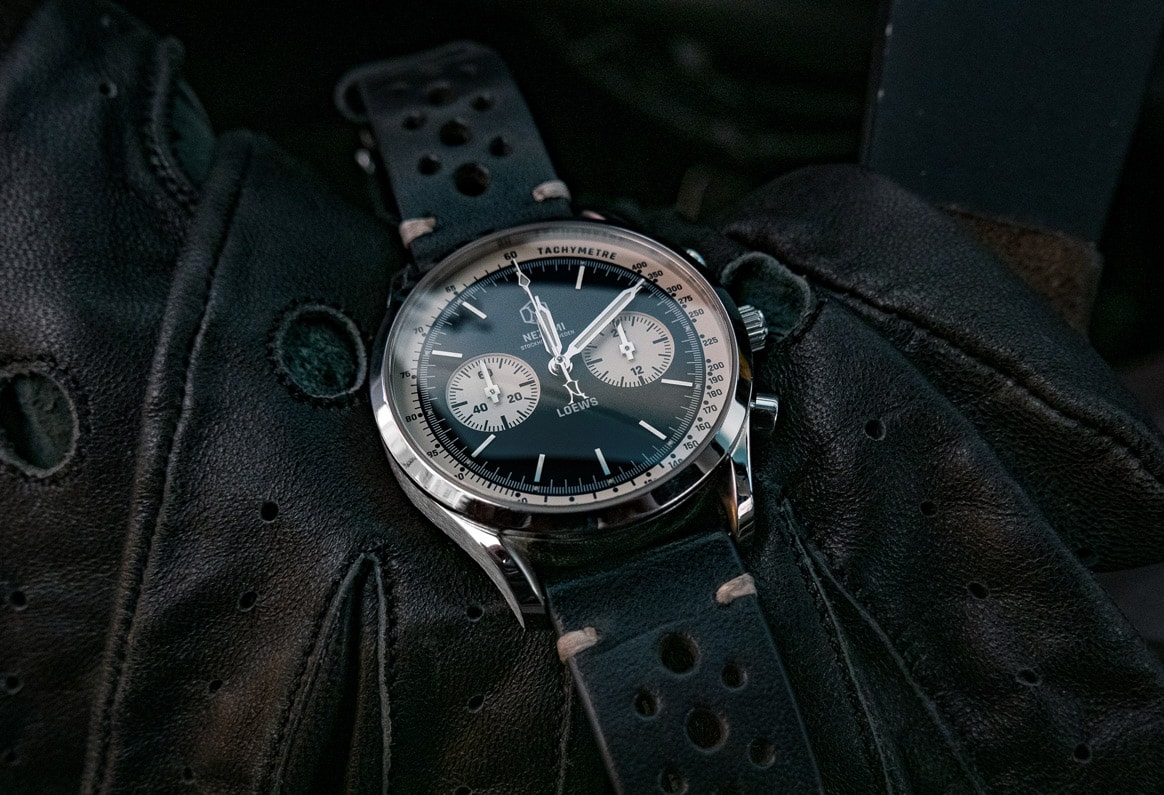 The Loews chronograph watch by Nezumi is a tribute to vintage racing with styling cues from the 60s and 70s. Nezumi® Studios have created a classic timepiece with sophisticated details, great looks and just the right amount of attitude. It’s clear to see that founder and designer, David Campo is both a watch and vintage race car enthusiast. 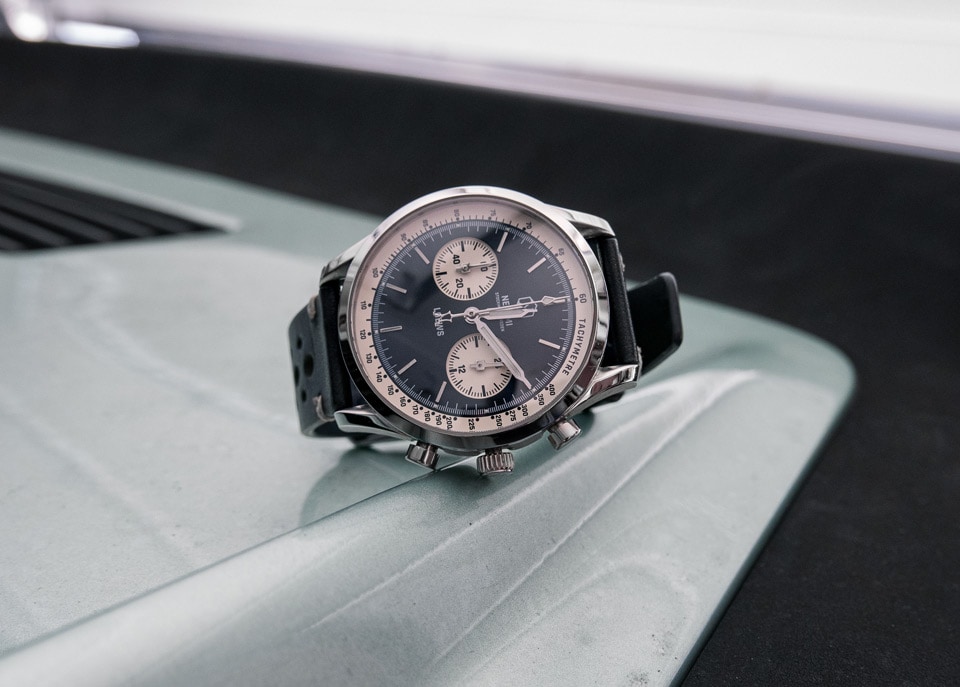 Why Loews is a clear racing reference

The name ‘Loews’ is a reference to the famous hairpin on the Circuit de Monaco. The narrow hairpin is the slowest corner in Formula One taken at just 48 km/h or 30 mph and the name changes according to the name of the hotel in the same location. From 1975 to 1998, the Loews Hotel gave name to the hairpin – a reference that only true racing fans will recognize. In addition to the name, the watch has several references styling cues from vintage racing chronograph. The racing strap with rally-inspired holes refers to the practice of “weekend racers” who put holes in everything hoping to shave off a few grams and save a tenth of a second on the lap time. 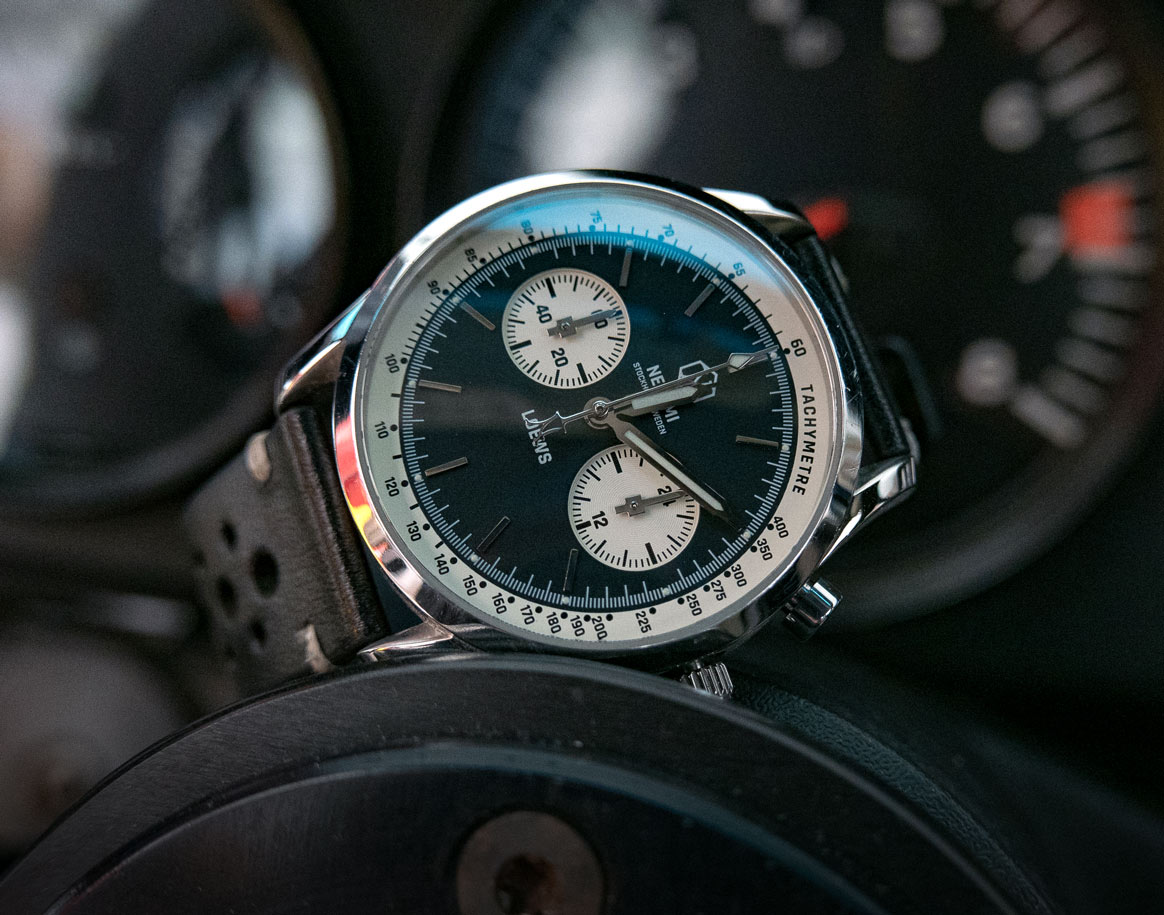 “With the Loews chronograph, Nezumi® Studios have designed a classic timepiece with a vintage feel, beautiful finish and details that are rare in the category!”

Dimensions of a classic timepiece

The 40mm wide case (47mm lug to lug) is the perfect size to match the vintage feel and the entire watch has a well-balanced look that pleases the eye. Looking at the entire Nezumi® Studios watch collection, designer David Campo has a fantastic ability to get the color palette just right. With the Loews Ref. LQ1.201 the off-white has a warm feel and adds dept to the design. Overall, it’s a more subtle design compared to the Voiture, but you can never go wrong with a classic timepiece. 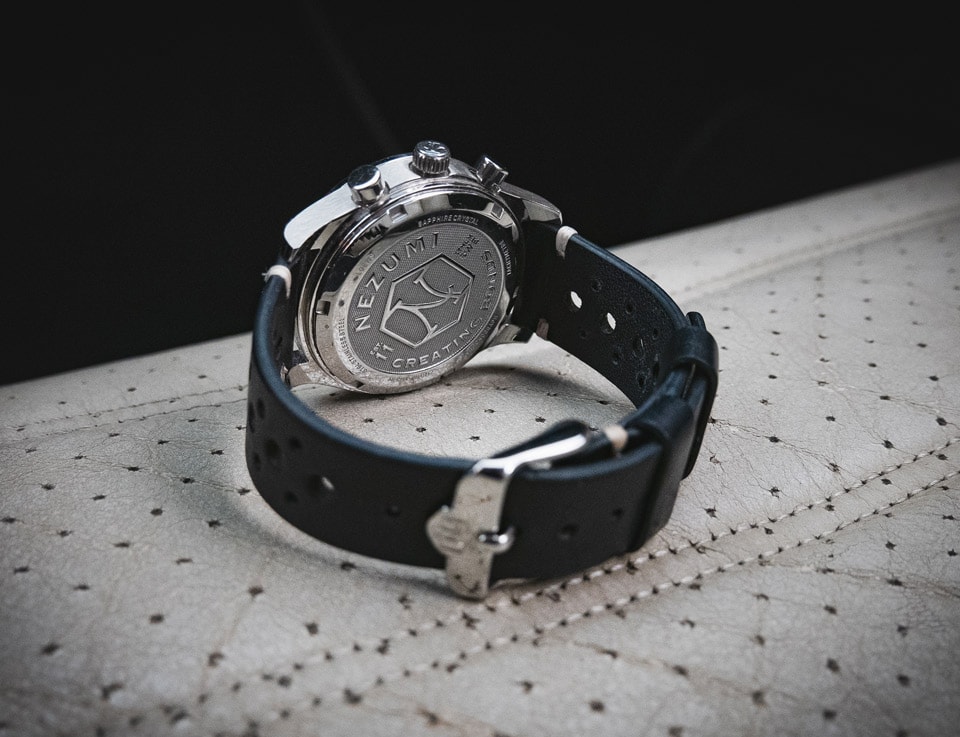 Features of the Loews chronograph

The clean look of the Loews chronograph is underlined by the brushed casing and the tachymeter being moved to the dial. Something that makes it read slightly larger than the other Nezumi models. The bombe lugs (originally made popular by the OMEGA Speedmaster) are highlighted by brushing on the inner and outer sides and bright polishing on the top. The back of the case features the Nezumi logo with the “N” that you also find on the spear-tipped sweep hand, the crown, the strap buckle and printed on the dial.

Learn all about what a chronograph is, and how it works 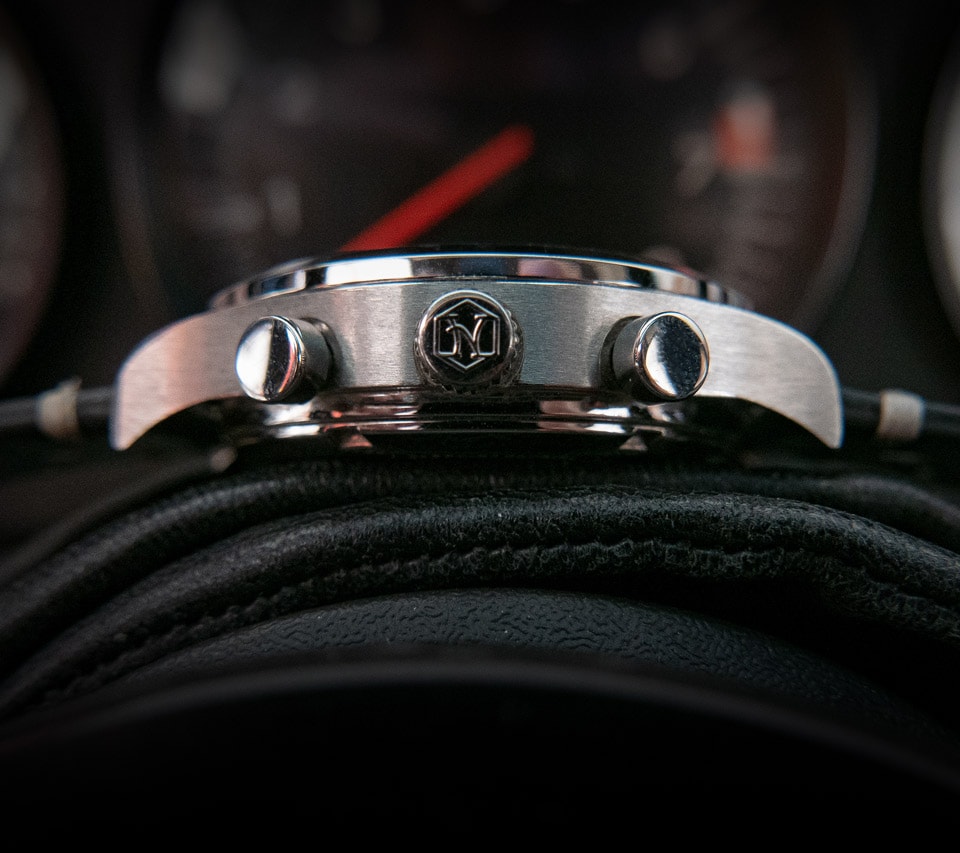 I must admit, that I originally bought the Loews for my husband…but somehow the watch ended up on my wrist. Luckily, Nezumi® Studios recognizes that their timepieces are unisex – which is the perfect opportunity to make a set a la Nina and Jochen Rindt (which is by the way, one of David Campo’s favorite watches). Having worn the Loews for the past year, the watch now has a few battle scars but no scratches on the glass which is made of top-grade genuine sapphire crystal. The RINDT rally strap has become softer and has a nice patina without looking ‘worn’. This is due to the material being vegetable tanned leather which is a more environmentally friendly process that will develop a beautiful “aged” look over time.

Related: why do watches need jewels? 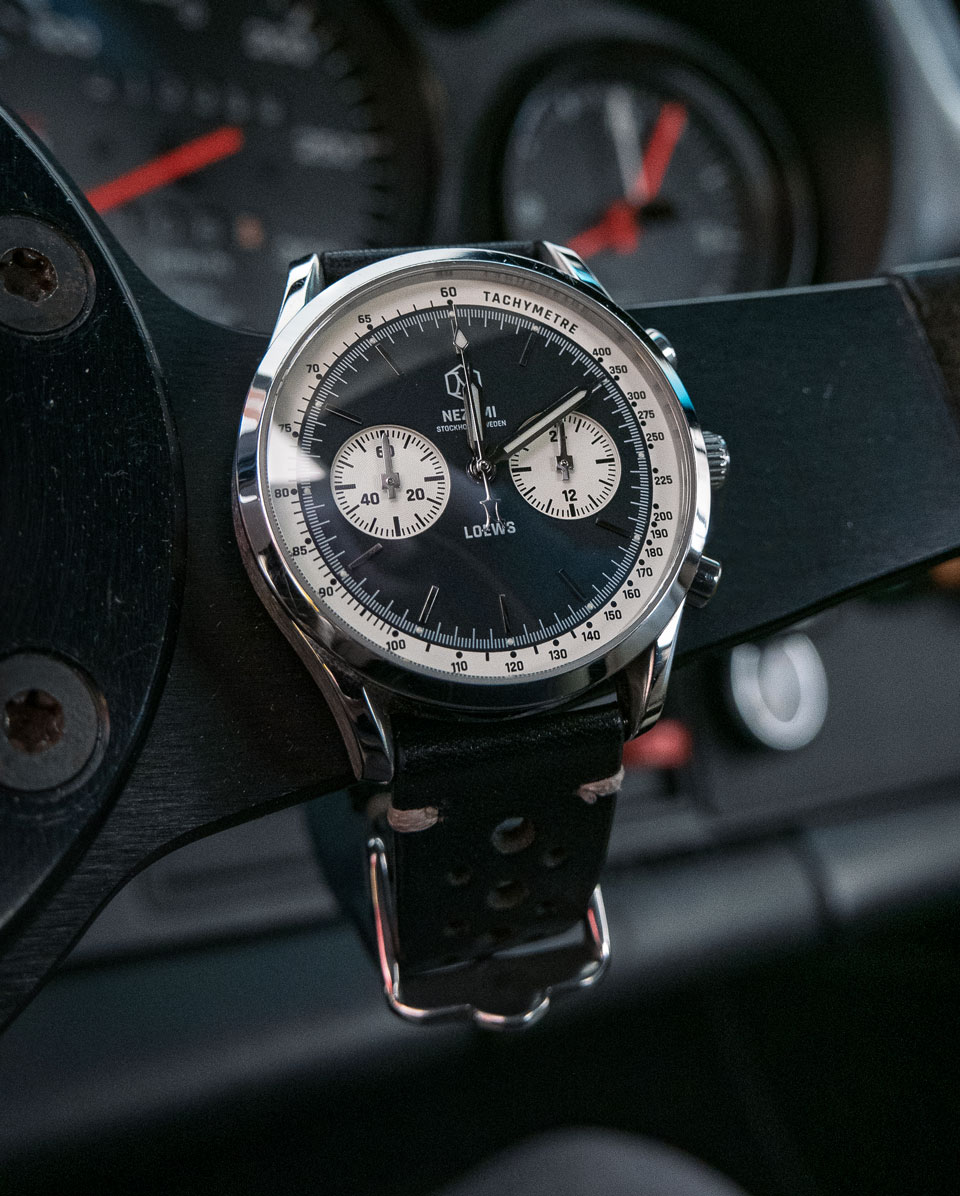 With the Loews chronograph, Nezumi® Studios have designed a classic timepiece with a vintage feel, beautiful finish and details that are rare in the independent watchmaking category. The quality and details make it look and feel like a much more expensive watch and I have been happily surprised about the comments I have received – both from men and women.

The Loews chronograph by Nezumi Studios is available in three editions plus one limited edition in brushed gold. See the entire Nezumi Studios watch collection here:

The start of the Nezumi Studios watch collection

David Campo made his first watch sketch in 2014. The idea came from his passion for vintage timepieces and classic race cars and he wanted to create a watch collection with inspiration from the 1960s and 70s chronographs. Several suppliers around the world were tested before the best of the best was finally selected and Nezumi® Studios initiated their campaign on Kickstarter in September 2015 with the ‘Voiture’ chronograph.

The campaign was one of the most successful watch campaigns in 2015 and ensured the needed funding for producing the first 3 color options of the Voiture. Since then, new models (Loews, Corbeau and Baleine) have been added to the watch collection and Nezumi® Studios also offers a range of limited editions, accessories from straps and bracelets to driving gloves.

Multi-function Chronograph: How to Use a Tachymeter and Telemeter