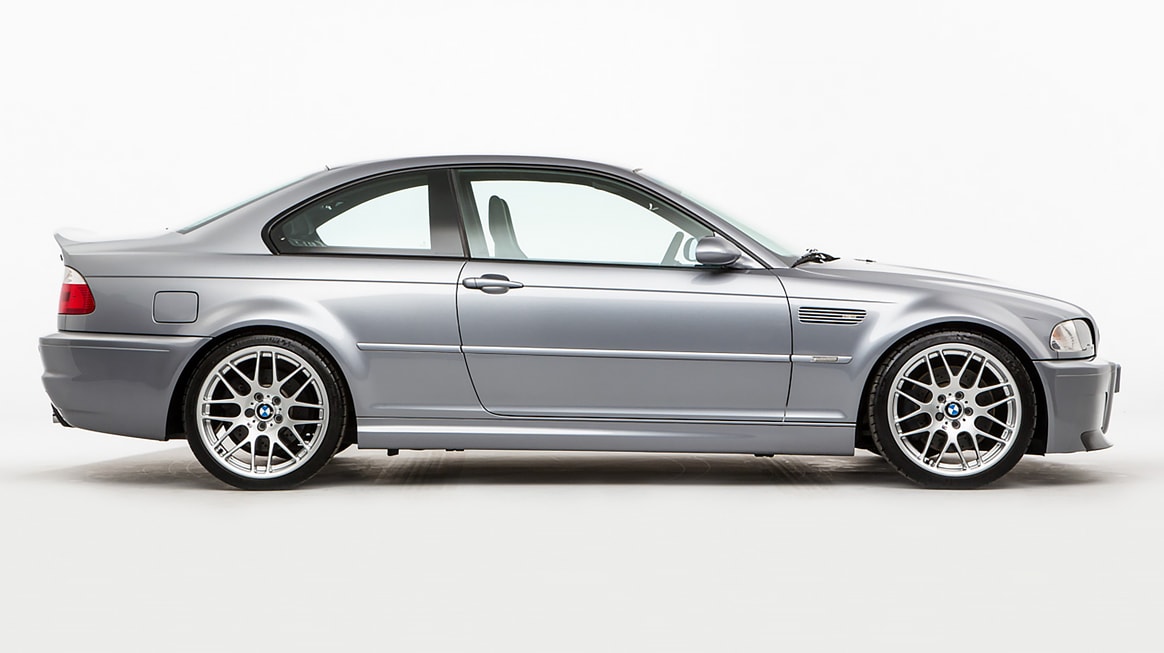 The E46 BMW M3 CSL is known as the lightweight legend. The successor to the 1972 CSL with the nickname “Batmobile” might not have the obvious looks of a supercar. However, the power, sound and performance is nothing less than legendary!

“The most hardcore BMW ever made”

What is so special about the CSL edition?

Well, the M3 CSL is no “ordinary” M3! The name CSL stands for “Coupé Sport Leichtbau” meaning Coupe Sport Lightweight and the spec list reveals that BMW took the weight reduction VERY seriously. As a result, the original roof was replaced with a carbon-fiber roof. Furthermore, the rear windows were made from thinner glass and special composite material and carbon-fiber were used for the rear diffuser, front apron, intake airbox and parts of the interior.

The boot floor cover made from lightweight fiber-board confused Top Gear host Jeremy Clarkson in 2004 as he thought the new material was “cardboard”. However, it perfectly explains just how serious BMW was about optimizing the model. Also, the CSL didn’t come with radio, air-conditioning or navigation system. Instead, you got an optimized engine based on the iconic S54B32HP in-line 6-cylinder engine and a robotized version of the M gearbox with a shift time of down to just 80 milliseconds. That was indeed impressive back in 2004.

A race car in disguise

The untrained eye might not recognize the CSL as a track day weapon or the super sports car that it is, but the model was and still is famous for its performance. Fans will also say that the unmistakable and instantly recognizable sound emanating from its carbon fiber intake airbox is one of the best features of the CSL. Furthermore, the wheels also indicate that this is not your normal daily driver! In fact, BMW had to underline the power and  force all buyers to sign a disclaimer before buying a CSL. This was to verify that you understood that the tires would not work in the rain or in cold weather. The special 19-inch CSL lightweight rims were fitted with semi-slick tires as standard.

How to identify an original E46 BMW M3 CSL from the outside?

You can identify a CSL by a number of external features such as the special door sills, carbon-fiber roof, the curved spoiler lip integrated into the carbon-fiber boot lid, and of course, the addition of those three special letters on its rear. The single ‘porthole’ on one side of the front apron, which gives the engine the necessary oxygen by means of an enlarged carbon fiber intake airbox, is also very striking and unique to this model.

You can listen to the unique intake and exhaust sound of the CLS edition here:

The CSL name was first used back in 1972 when BMW unveiled the 3.0 CSL – a special version of the Six CS (E9) developed to race the European Touring Car Championship. Also in the first edition, weight reduction was a target and achieved by using thinner steel for building the unit body, deleting the trim and soundproofing, installing aluminum doors, bonnet, and boot lid, and using acrylic side windows.

The final version of the first BMW 3.0 CSL was homologated in July 1973. In addition, the aerodynamic package was also launched. Because of the fins, spoilers and a tall red wing, the model earned it’s superhero nickname as the “Batmobile”.

The M3 CSL shown in this article is currently for sale at Millennium Heroes in the UK – for more information please visit: www.millenniumheroes.com

If you are more into the 1970s model, Fast Classics have a 1972 CSL for sale – but that also comes with a much bigger price tag! For more information please visit: www.fast-classics.com

In the footsteps of the CSL edition

In 2010, BMW introduced the M3 GTS. Limited to just 150 cars this is one of the rarest M cars ever produced! Just like the E46 M3 CSL, the GTS is based on the engine of the M3 but with optimizations, weight reduction and power increase. The M3 eight-cylinder engine was increased from 4.0 to 4.4 liters producing 30 hp more than the standard model, the weight was reduced with 136 kg (300 lb) and the M dual-clutch gearbox also used Drivelogic which was introduced with the CSL. The ultra-rare M3 GTS is recognized by its bright orange paintwork, matte black details and the rear wing.